Last week I shared the top five posts from the first year of the blog. The next five were an interesting bunch as well, so I’m sharing them this week. Numbers 1-5 are those with broad appeal, posts you might happen upon by googling a popular topic. But numbers 6-10 include some that are much more personal. I’m glad they’ve connected with people.

Here, without further ado, are the runners-up from the blog’s first year.

END_OF_DOCUMENT_TOKEN_TO_BE_REPLACED

Happy Blogiversary to Me

First off, apologies for not blogging yesterday. I ran into technical difficulties — the travails of blogging on the road (and, ahem, not prewriting and scheduling posts)….

Second, this is a special week here on the blog. I’ve been “author blogging” for a year tomorrow. (Shout-out to Kristen Lamb and the WANA112 crew, who finally got my butt in gear to start this blog!) It’s been a fun ride as well as a challenge, I’ve met a lot of wonderful people, and I like to think it’s been good for my writing, too.

To celebrate, here’s a recap of the top posts on the blog so far….

END_OF_DOCUMENT_TOKEN_TO_BE_REPLACED

Seeing the Sights in Kuala Lumpur

Last week I promised to tell you about the sights in Kuala Lumpur. We visited two:

This was our first adventure as tourists (i.e., sightseers). The trip was also a good way to ease into being travellers in Malaysia. The caves are way out in the suburbs of KL, so we got to take the monorail from Bukit Bintang, change at KL Sentral, and then take the surface LRT — both great ways to see the city as well as learning to manage public transit.

The Batu Caves themselves were…a fascinating and strange experience. Maybe you’ve been to a big church that’s a tourist destination in itself — Notre Dame, or St. Paul’s Cathedral. Picture the mixture of worshippers and gawkers, with a certain amount of kitschy religious paraphernalia being sold nearby (plastic Jesus and the like).

Now translate all of that to a Hindu temple.

Arriving at the caves, you pass by a lot of little stalls selling cheap paraphernalia and souvenirs, along with some amusement park rides. You also pass some small temples and a giant pastel-coloured statue of Hanuman, the monkey god. Then you emerge at the bottom of a giant flight of steps. As my guidebook explained it, the steps are because it isn’t easy to enter Heaven, so entering a temple should also be a challenge to some degree. Thus, climbing the steps to make an offering is a spiritual Good Thing. 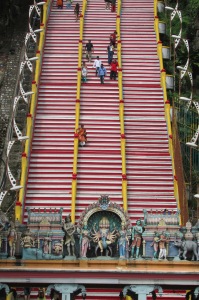 The 273 brightly coloured steps lead to a cave set in a limestone cliff, past an enormous golden statue of the god Murugan, worshipped mostly in southern India and places with a high population of emigrants from there. (Most of Malaysia’s Indian population are descended from Tamils from the south.) Inside the cave are more stalls selling paraphernalia, a small temple, and some shrines. The deepest part of the cave is open to the sky, and with the light falling through, you can imagine why people might have decided this place was sacred.

We saw plenty of tourists like ourselves and also plenty of worshippers, climbing the steps barefoot with offerings. One couple was bearing up a baby in a sling hung from a long branch (maybe bamboo?). Another older woman was climbing one step at a time, supported by two younger men, clearly in pain but determined to reach the top.

I took pictures inside the caves, but not of the worshippers. I’m trying to be mindful of my role as a tourist, and trying not to be obnoxious. It’s a work in progress, I think.

KLCC and the Twin Towers

Our purpose in visiting KLCC was twofold. First, we were there to meet a friend — someone I’d met on the Internet, had known for many years, and had never thought I’d be able to meet in person. (A fascinating experience, by the way. It went so well that we managed to squeeze in another two visits before we had to leave Kuala Lumpur.) Second, we were there to see the famous Twin Towers and the other sights in the area.

We started off at Petrosains, a curious mix of science activity centre and oil industry promo. (Offshore oil drilling is big in Malaysia. The Petronas Twin Towers belong to an oil company.) There were lots of fun hands-on experiments, but the highlight for me was a special exhibit called Sultans of Science, all about science in the medieval Islamic world. The tenth through fifteenth centuries seem to have been a golden age — everything from astronomy to exploration to the foundations for engines came out of that time. We got to play with working models of some of the early technology. The show isn’t that large, but is packed full of interesting tidbits. It’s a travelling exhibition that has already been through North America, Singapore, and Thailand…if it comes to a location near you, I highly recommend it.

We rounded out the day by going up the Petronas Twin Towers, among the tallest buildings in the world (though, my Canadian citizenship compels me to add, not taller than the CN Tower!) Our tickets included a trip across the Skybridge between the towers and a visit to the observation deck, both with grand views across Kuala Lumpur and down to a fine urban park at their base. It’s a tourist trap, of course, but we enjoyed ourselves.

Side note: KLCC also includes what I’m told is a fine aquarium, along with an upscale shopping mall and an urban park.

New Book: The Lives We Lost by Megan Crewe

This week will see the release of a new YA book that I was lucky enough to read in advance. The Lives We Lost by Megan Crewe is a sequel to The Way We Fall, and in my opinion it’s an even better book than the first.

The Way We Fall is about a girl living in a small island community (in Canada — yay) that’s hit by a pandemic. First, people start displaying strange symptoms. Then they start dying. And when things get really bad, the mainland cuts them off, leaving them to pull together…or tear each other apart in the struggle to survive.

Despite the above summary, it’s not a thriller, but a quiet story about family, community, and making choices to protect loved ones…and finding reasons to keep going and keep hoping, no matter how bleak the world looks.

END_OF_DOCUMENT_TOKEN_TO_BE_REPLACED

The first stop on our Asian adventure was Kuala Lumpur, the capital of Malaysia. My impressions of it were a little confused because I had no basis for comparison – this is my first time in Asia. So here are some thoughts from a week in the city…

The taxi ride from the airport took us down elevated freeways and past glossy high-rises, much like Toronto. Once we entered the core of the city, though, everything changed. We were headed for a central neighbourhood called Bukit Bintang (pronounced Bookit Bintahng). It was Saturday night, and we cruised down brightly lit streets packed with people, cars, and motorbikes, strung with red Chinese lanterns. Plastic restaurant tables covered the sidewalks, with noise and bustle everywhere. For someone newly arrived after a long journey, it was both stimulating and overwhelming. 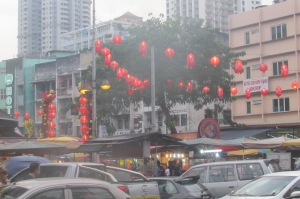 The next morning we woke up to humid heat and, outside our window, tropical bird noises. I expected to have some trouble adjusting to the climate after a Canadian winter. (We’re coping by seeking out air-conditioning on a regular basis throughout the day!) What I didn’t expect was how mind-boggling it would be to hear the birds out of some nature documentary, or see palm trees growing out of the ground. I still haven’t gotten over the trees! 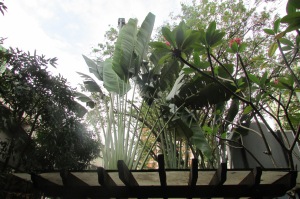 Traveller’s palm trees outside the guesthouse named for them

We stayed at Travellers Palm Lodge (formerly Travellers Palm Homestay, if you look for it on TripAdvisor), down a little alley just off all the action, and close to the monorail. It’s a family-run B&B/hostel, with five rooms and an 8-person dorm. There’s a nice little patio to have breakfast on, a friendly and helpful proprietor, and her adorable small daughter. It’s also a little, er, rustic — the a/c is only on at night, and the shared bathrooms are accessed from a balcony…oh, and the toilet and shower occupy one small room together, which is pretty standard here. But overall we really enjoyed staying there.

More generally, Kuala Lumpur is a mix of modern and old. There are brand-spanking-new malls with all the luxury chain stores (I wrote this sitting in a coffee shop between an indoor Jaguar dealership and a Tiffany’s). The streets are congested, and there’s a distinct lack of pedestrian crossings…which means a lot of scary jaywalking. (But drivers do obey traffic signals and mostly stay in their lanes, except the motor scooters…) Sidewalks are narrow, crowded with vendors, and uneven. Wifi and cell phones are ubiquitous. There’s a modern LRT and monorail network. And so on.

KL is also a fascinating mix of cultures. Signage is mostly in Malay and English. Driving is on the left, and the electrical outlets take the same kind of plugs as in England — legacies of being a Commonwealth country. The three major cultures here are Malay, Chinese, and Indian (Tamil). People here wear everything from t-shirts and shorts (you’ll see plenty of leg, but almost no bare shoulders) to hijabs and long skirts — Islam and Hinduism are both prevalent. Chinese New Year is coming up, and all the malls are decorated for it, just like Christmas displays back home.

Cuisines from all three cultures are readily available. There are also plenty of Western restaurants (and chains), Thai, Middle Eastern, you name it. We’ve eaten:

We’re gradually getting more adventurous in our eating — we started at fancy-looking Western-friendly restaurants, but later we had dinner on that outdoor restaurant strip we drove through on our arrival, and we had lots of dosas at a little outdoor Malaysian-Tamil place. So far, so good! The water here in KL is potable — we’ll have to be a lot more careful when we leave the city, and also in the other countries we’re visiting.

Next up: Taking in the sights of KL…

Travel Memoirs I Have Loved

One of the things that inspired the wanderlust that led to my Grand Adventure was, of course, books. Growing up, I read plenty of fiction set in other parts of the world — maybe I’ll blog about that another time. But I also devoured autobiographies and memoirs by people who had travelled or lived in places far from their homes. Here are a few of them…

Also worth mentioning are the fabulous collections of women’s travel writing put out by Travelers’ Tales.

You might notice that all my examples are older — I haven’t read much travel writing lately. Here’s where you come in. Do you have a favourite travel writer, or perhaps a  favourite biography of an intrepid wandering soul? Please share!