Ursula K. Le Guin (Re)read: The Ones Who Walk Away from Omelas 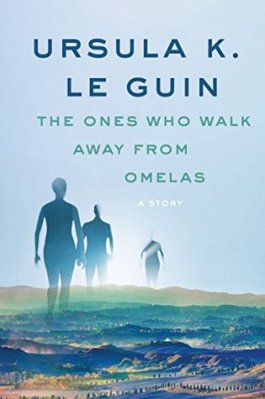 Welcome to the first installment in the Ursula K. Le Guin (Re)read, in which I geek out about her work and invite you to join me! We’re starting with her short story “The Ones Who Walk Away from Omelas”, because (a) it’s so well-known, and (b) it’s short, so it makes a good read-along.

The story was first published in 1973. To put that in context, her first novel was published in 1966. Here are the dates for some of Le Guin’s best-known novels:

So by the time she published “Omelas”, she was already at the top of her game as a professional science fiction writer. And it shows…

The story starts off like any other fantasy story — describing the city of Omelas and its people in grand, sweeping terms. Sounds pretty typical. But a few paragraphs in, we get this:

Given a description such as this one tends to look next for the King, mounted on a splendid stallion and surrounded by his noble knights, or perhaps in a golden litter borne by great-muscled slaves. But there was no king. They did not use swords, or keep slaves. They were not barbarians. I do not know the rules and laws of their society, but I suspect that they were singularly few.

Whoa…suddenly we’re in a meta-story. The narrator is making comments on the story, in first person, while telling it. This isn’t a normal story at all–in fact, there aren’t even any characters (except one, whom we’ll get to later). It’s a thought experiment that actually works.

Having said that, there’s also some beautiful, lyrical writing. From the same paragraph:

The trouble is that we have a bad habit … of considering happiness as something rather stupid. Only pain is intellectual, only evil interesting.

…and then she goes on to show, through the rest of the story, how happiness can be complicated, even poisoned. Do the people of Omelas have true happiness? …I don’t know, what do you think?

And then we get to the real meat of the story: the child hidden in the closet, who must be unhappy so that everyone else in Omelas can thrive.

I knew this about the story going in, so I was surprised how effective it still was for me as I read it. Le Guin describes the child’s circumstances in unflinching, brutal detail after detail. The pure happiness described earlier begins to sound horrifically callous.

Then the narrator explains how the people of Omelas justify the suffering to themselves, once they learn of it around the age of puberty: the child is too far gone to benefit from kindness, they can do nothing to change its circumstances anyway, and all the good in Omelas depends on this one child’s misery. It all sounds fairly reasonable to most of the people in the city, since they go along with it.

…except for the few who refuse to participate, and just opt out by leaving the city. They don’t come back and start a revolution to rescue the child, they don’t take their loved ones with them; they just make a decision, one at a time, to leave.

The question is left hanging: would you accept this deal? To have a prosperous society, everyone in it happy and content, at that price? But…no matter how awful the price, would you really be able to walk away?

There are any number of parallels one could draw. It’s tempting to ask: What is this an allegory of? What is Le Guin really writing about? We could come up with any number of answers, based on contemporary issues or issues that were big at the time when she was writing.

My copy (the ebook edition) includes an afterword by Le Guin herself, who talks about her influences, and then writes:

In talking about the “meaning” of a story, we need to be careful not to diminish it, impoverish it. A story can say different things to different people. It may have no definitive reading.

And a reader may find a meaning in it that the writer never intended, never imagined, yet recognizes at once as valid.

What do you think? How should we read the story? What does it “mean”?

As I mentioned earlier, I knew the basic premise of the story ahead of time, but I was amazed and delighted by the mastery of craft woven around it. The story’s not just a fable or a philosophical question; she has fun with it too, and knows exactly when to throw in meta-commentary or immerse us in the moment, when to draw on our emotions and when to make us think. And I was blown away by the ending. That’s quite a feat for a story with only one character (and no character arc…unless you count the society as a whole, or the reader’s reaction? What do you think?).

Over to you! Did the story work for you? How effective is it in what it sets out to do? If you’re familiar with Le Guin’s work, is “Omelas” a good representation of her writing?

Next up: We’re going back to the beginning! I’m aiming to read the Hainish Cycle (both novels and short stories) straight through in publication order, with maybe some unrelated short stories thrown in for variety. Here’s what’s lined up for the next couple of posts:

…and then we will see! Hope to see you back here to join the (re)read on May 7.

A little while ago, I announced the SF&F Genre Classics (Re)read, in which I planned to read (or reread) classics and then blog about them. For those who want to play along, first up is the recently deceased and much beloved Ursula K. Le Guin.

Where does one start with Le Guin? She was a grand master of words. She tackled big ideas like a philosopher, and captured small moments with a poet’s ear. She was a multi-talented author of a huge range of works–adult science fiction and fantasy, YA and children’s books, novels and short stories, poetry, non-fiction, even translations. So…take your pick.

I haven’t read even half of them, which is why I’m embarking on this slow (re)read. Here’s a sampling:

YA Fantasy: Earthsea and Annals of the Western Shore

Many readers of a certain age first discovered her through the Earthsea books, which today might be shelved as YA fantasy. She first published a trilogy (starting with A Wizard of Earthsea), and then, much later, returned to the world of Earthsea for several more loosely connected novels and short stories.

More recently, she wrote another YA fantasy series: Gifts, Voices, and Powers.

Writing a good children’s book is much harder than it looks, but she has done that too, with her Catwings series (flying cats! what’s not to love?). I haven’t read her other kids’ books–if you have, please chime in!

Besides Earthsea, she is best known for The Left Hand of Darkness, a science fiction novel that explores gender in ways that were groundbreaking at the time (it was published in 1969 and won two major genre awards, the Hugo and the Nebula).

This novel is part of a loose cycle of stories all set in the same universe, dubbed the Hainish Cycle. One way to describe them might be “sociological and psychological science fiction”.

She has also written a number of short stories in both the Earthsea and Hainish universes, as well as standalones. Many are just excellent, and we’ll be getting to those in our (re)read. Speaking of which…

I’ll be posting every two weeks for a while, starting on April 23. I’ll be tackling the Hainish Cycle novels in publication order (The Left Hand of Darkness is number 4), mixed with her early short stories from the collection The Wind’s Twelve Quarters. If you’d like to follow along, here’s what’s coming up [EDIT: links are being added as the posts go up]:

…and then we will see!

Her early novels are very short by today’s standards, though not for the time when they were written. If you want to play along, they can be found in several collections, most recently Worlds of Exile and Illusion (available in trade paperback and ebook formats).

See you back here on April 23 for “The Ones Who Walk Away From Omelas”!