Category Archives: geekery and other media

Fair warning: I’ll start with some explanations, but I can’t explain every reference. This post will get geekier as it goes on… 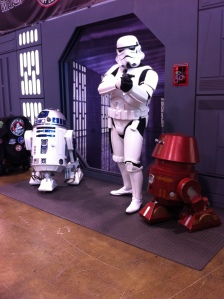 Yes, that’s a person in the Stormtrooper suit. Photo by Louise Kiner.

Labo(u)r Day weekend saw Toronto’s biggest fan convention — FanExpo. It’s a comic-con for people who like comics, anime, gaming, anything to do with science fiction and fantasy and horror (mostly TV and movies), and related activities such as steampunk and LARPing. Actors show up and sign autographs and do photo ops. (This year’s celebrity guests included Elijah Wood, several actors from Doctor Who, William Shatner, and Patrick Stewart.) Hundreds of thousands of people flood the convention centre. It’s crazy and geeky and overwhelming and exciting all at once.

This year I didn’t go to any of the panels or Q&As. My geekery tends to revolve around books, and although I do watch genre movies and TV, I’m not terribly interested in seeing the actors involved. (I tend to be disappointed when they’re less articulate than their characters — probably the fault of the sharp dialogue that’s in vogue these days. Plus you have to pay extra for autographs and photo ops, and it’s not cheap.) However… 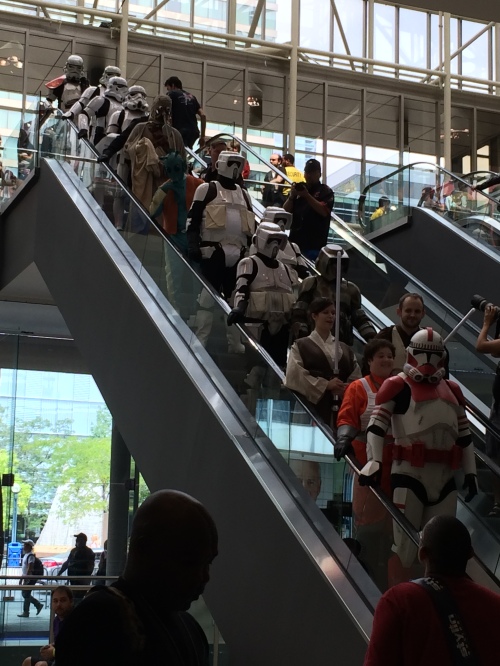 Star Wars cosplayers. Photo by me.

One of the biggest parts of FanExpo is cosplay — people dressing up as their favourite characters. Part of the fun is watching the effort that people put into their costumes, either replicating the originals with as much attention to detail as they possibly can, or putting a twist on them (like genderswapping). For more on cosplay, see Kit Campbell’s Introductory Guide to Cosplay and my own post from last year’s FanExpo.

Many years ago, I used to cosplay as Lieutenant Commander Data from Star Trek: The Next Generation. I haven’t done it in a long time. But this year, my two partners in FanExpo crime decided to dress up as two of the Doctors from Doctor Who. So I pulled together a last-minute Amy Pond costume (based on this outfit). 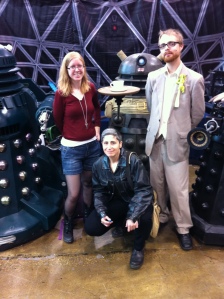 Me (left) and my partners in crime, Ninth Doctor (kneeling) and Fifth Doctor. (Why yes, that is celery in his lapel.) Photo by a kind Doctor Who Society of Canada volunteer.

It wasn’t a total success — for one thing, my hair isn’t red enough to be noticeable anymore — but it was fun. I don’t think I’m going to be hooked into cosplaying again (I have too many hobbies already) but I did enjoy taking pictures with — and of — all the Doctor Who paraphernalia and the other Whovian cosplayers.

(And then I bought a T-shirt with some Game of Thrones snark, but I digress.)

Even more fun was drooling at all the other cosplay. I saw:

END_OF_DOCUMENT_TOKEN_TO_BE_REPLACED

Posted in geekery and other media 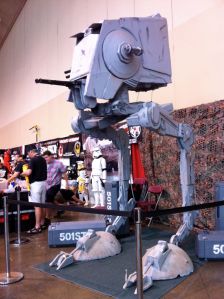 A model of an AT-AT from Star Wars. Photo by Louise Kiner.

This weekend I took in my second Fan Expo — for those of you not in Toronto, think a smaller version of San Diego Comic-Con.

(If you’re still confused, there’s a primer here. Short version: it’s a convention for science fiction fans, with a lot of TV and film actors doing talks and signing autographs. And so much more than that — read on…)

I went only on Sunday, so I missed the biggest day (Saturday) but also got to skip the worst of the crowds, and there was still plenty to see.

END_OF_DOCUMENT_TOKEN_TO_BE_REPLACED

Posted in geekery and other media