As we head into the weekend, here’s what I found on the Interwebs for your reading pleasure…

I’m not sure how I feel about this, but A Wrinkle in Time is being made into a graphic novel (via The Mary Sue).

For those who are watching Game of Thrones or are interested in conlanging, here’s an interview with the guy who created the Dothraki language (via Juliette Wade’s worldbuilding blog).

If you’ve ever beaten yourself up (as I do, all the time), you might need to read this:

My inner dialogue sounded like “come on, you idiot. You were stupid enough to say you could do this, so you effing well do it. Now. No, you’re not going to bed till you freaking get it done.” Now it’s more “come on, girl. You can do this. You’re smart and awesome, and you can do this.” Guess which works better to get things done?

Sing it, sistah! Read the rest at KD Sarge’s blog.

That’s it for the week. Go forth and be merry! Me, I’ll be dancing all weekend.

Like many of us, I devoured a lot of books when I was young. More than a few of them have become books that I can’t look at with any sort of objectivity now, books whose words are still lodged deep in my brain. A reread might show that they’ve been visited by the Suck Fairy. Yet they might still hold some of the emotional power that grabbed me so strongly back then. This post is the first in a series that looks back at some of my favourites. 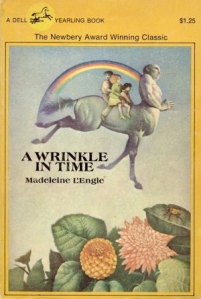 First up is Madeleine L’Engle’s Time Quartet – A Wrinkle in Time, A Wind in the Door, A Swiftly Tilting Planet, and Many Waters. (I haven’t read any of her books about the next generation of Murry-O’Keefes, or the fifth book that made the original series into the Time Quintet.) I reread the original four, and was struck by what I remembered and how it shifted.

The first two are Meg’s books, and they’ve become my favourites. Meg, the awkward, bespectacled girl, was someone I identified with very strongly. I was fascinated by the subgenre of science fantasy, in which ~magic, space travel, science, and classical evil are juxtaposed – one reason why I loved Diane Duane‘s Young Wizards series as well. While I generally prefer antagonists with believable, human reasons for doing what they do, the Echthroi are damn creepy, and Meg’s standing up to them in each of these two stories (to save Charles Wallace in both, plus her father in the first and her hated school principal in the second) rings of fairy-tale heroism in the best way.

I’m going to skip to Many Waters, which I remember being confused by, and my recent reread confirms that impression. The pre-Flood world, with its seraphim, nephilim, and miniature mammoths, is a strange place, and what little we see of it doesn’t convey the level of evil I would have expected to make the Flood necessary. There’s also not a lot of plot or character development; Sandy and Dennys spend most of the book waiting around or gardening or worrying about the flood, and they return to their world in much the same state as when they left it. (Tip of the hat to Narnia here, in which the Pevensies spend years as kings and queens and then go back to being children – something that was pretty much left out of the books, much as I love them, but explored very nicely in the recent films.) 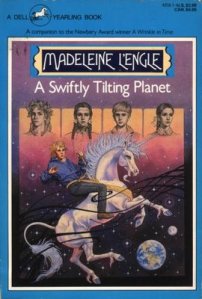 A Swiftly Tilting Planet [ASTP] is the one I have the most complicated relationship with. When I first read it, it was hands-down my favourite – time travel, destinies, exotic locales, wordplay with names, and unicorns, oh my! (Lloyd Alexander’s The First Two Lives of Lukas-Kasha tickled my fancy in the same way. It was my favourite of his until the Westmark trilogy took over – I was also a sucker for princesses posing as beggars.) But in my recent reread, I was highly disappointed to find a passive protagonist who’s just along for the ride – which I realize is the point, but it doesn’t make for gripping reading – plus some uncomfortable hints of racism and the “Noble Savage”. The Suck Fairy was at work.

At the same time, ASTP still holds seriously powerful writing. L’Engle’s lyrical prose, in this book particularly but also in the preceding two, made such a huge impression on me as a child that rereading it felt like unearthing hidden corners of my brain. (It’s in there so deeply that I have to assume my own prose has been influenced by it. Or at least I can hope!) Same goes for some of the sequences – the Murrys holding hands and singing “Dona Nobis Pacem” as a desperate prayer for peace, the sections where Charles Wallace is trapped in the brain-damaged Chuck, the gradual redemption of “Beezie”, and of course the wonderful rune. There are some things that the Suck Fairy just can’t touch.

For another take on rereading the Time Quartet and L’Engle’s other books, see The Madeleine L’Engle Reread on Tor.com.

Have you reread any of these books or another childhood favourite as an adult? How did it hold up? If the Suck Fairy visited, which parts did she leave untouched?